This is not a movie set, but actual real life in my hometown of Santa Ynez. The Unforgiven showed up in their clothes, looking like full grown men who’d come to drink and take what they wanted… and you could tell they meant business the second we put them on the street.

High noon sun is usually brutal: the dark eye sockets, the harshness that makes everything extreme. But with these guys, it seemed to intensify the crunching down the street, back from Hell manliness that was a big ingredient of what we were going for. That harshness, which was so unforgiving, was exactly the tone we needed.

My favorite part – other than whistling Marconi’s ‘The Good, The Bad & The Ugly’ all day, feeling like it was my own spaghetti Western being shot – was the fact that it’s the only picture my father’s ever helped me on. There was no sense of drama when we started, so I called him and had him come down in his pick-up to drive back and forth on cue to kick up the dust that adds the sense of motion and something big about to go down.

To heighten that feeling, I remember aging and staining this picture through old school chemistry to take it to that faded, broke down kill-or-be-killed place. To reinforce everything the band in their own clothes had brought… when it was time to pull this image for the show, I decided to digitally process the borders to rough it up even more. 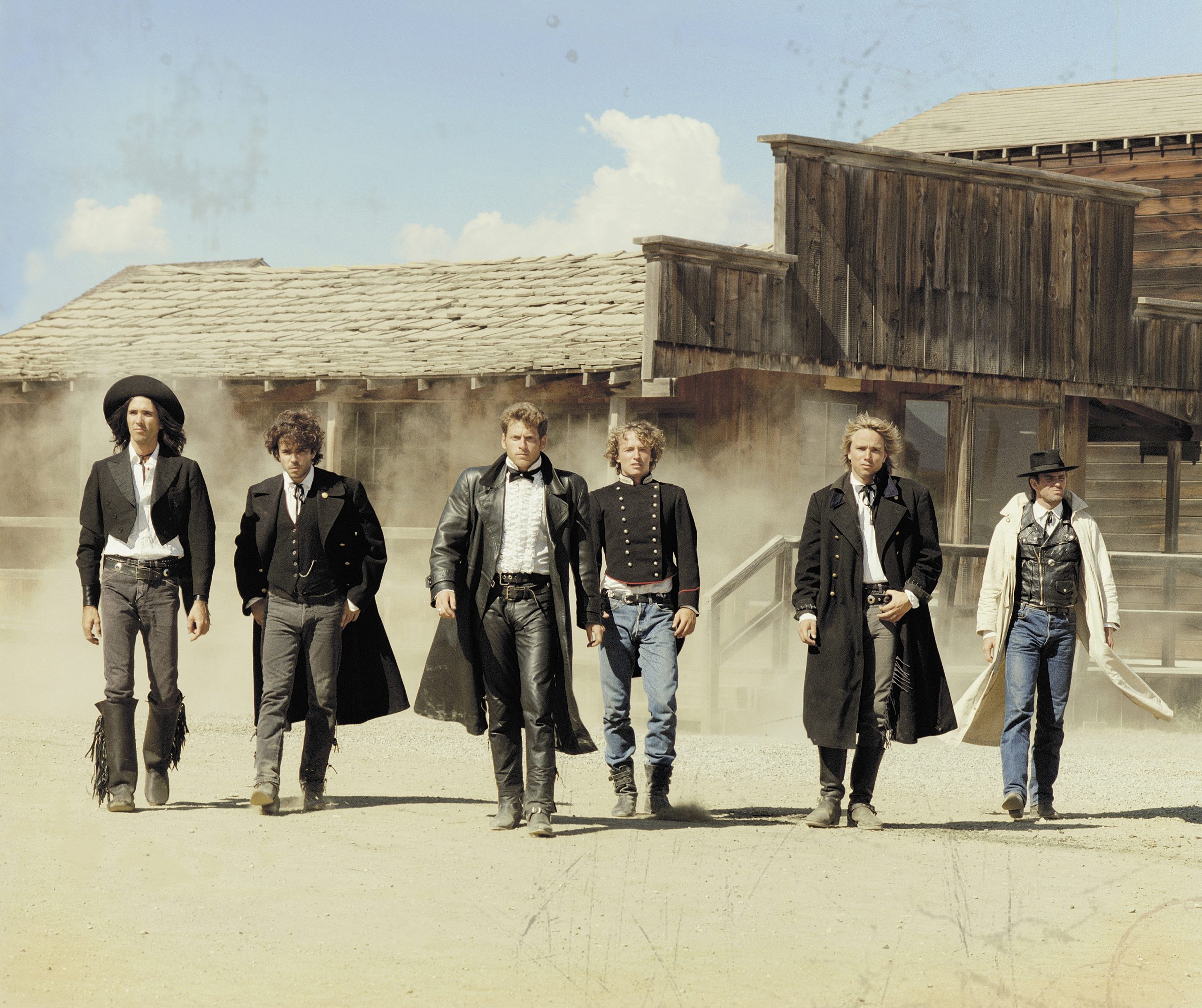 Although not designed as such, this shot would eventually become the Elektra album cover shot, and really was the definitive Unforgiven image from the first lineup and year of the band’s history. As a musician, I came out of the original ’77 LA punk rock movement, but I grew up in the film business — my dad was an actor — and movies were my first love. In fact, Mike Finn, who played bass in the first two lineups, and I met in a film history class, and the two of us initially brainstormed the Unforgiven idea together.

Although we were pretty obsessed with not looking cheesy (and yes, I realize cheesiness is in the mind of the beholder), and there was
a conscious melding of authentic clothing with iconic rock n roll gear. If memory serves the photo shoot was done at an old west town near Santa Barbara somewhere. The shoot took all of 10 minutes as I remember it, and I think we were very interested in getting it done and getting the hell out of there before anyone came along asking us what the hell we thought we were doing. Our manager, Mike Minky, in his old Ford Fairlane, or whatever the hell it was, would peel out behind us and clear frame in order to create the dust effect, every time we started the walk towards Scarpati’s lens. But then the dust would sort of overtake us, and the shot would eventually be blown, so we’d go back to one: Minky would position his planet killer behind us, Scarpati’d say: “go”, Minky’d peel out again, and we’d charge with great purpose and stern faces once more towards the camera. Obviously our main sources of inspiration were the Spaghetti Westerns, not only in look, but in sound. From those films we pirated the long coats, but only one of us, Mike “Just” Jones, actually wore a duster. The rest of us wore overcoats and frock coats and military gear found at flea markets in Europe. There was a time on Melrose when you could go into many of those hipster shops and see a rack of long coats and dusters adorned with a sign that read: “Unforgiven Coats.” And indeed that look was really the thing that lasted long after the band was dead…

The spurs are cool, and very real with me, actually. I’ve been riding horses since before I could walk, have always owned horses, still do, and even did a stint touring for a few years as an armored jouster after ending the Unforgiven. FYI, knights get even more chicks than musicians…just sayin’.
Steve “John Henry” Jones