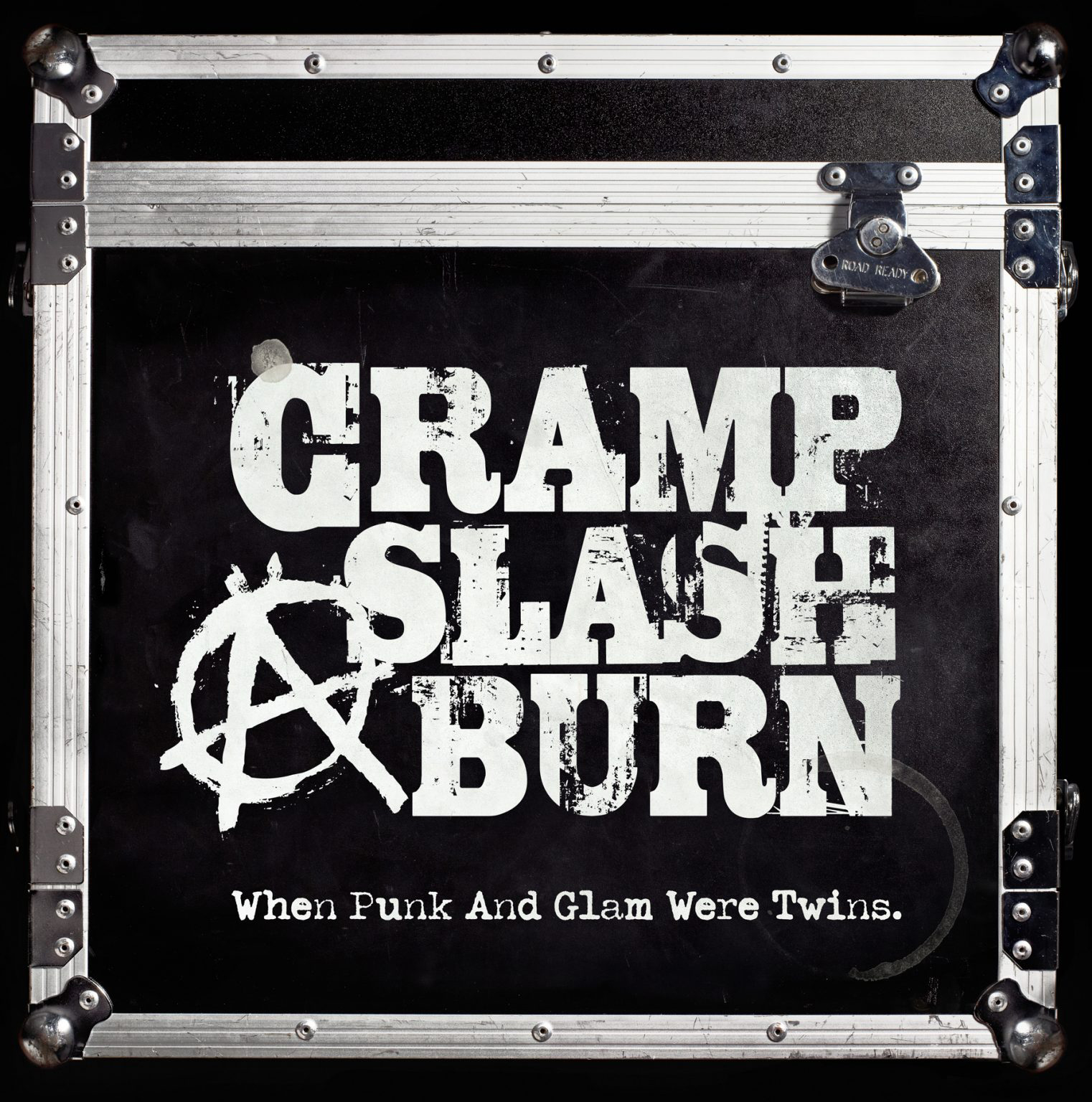 On the making of CSB…

I didn’t set out to document the “Hollywood in the 80’s” part of my career.
Starting about five years ago, I got a series of random phone calls and emails looking for images from one band or another for this project or that project. I had always thought of my archives as being at least somewhat organized…then I had to actually locate something in them. There were at least three different filing systems…alphabetical, chronological, and “hey! There’s still room in this box!”
So it started as a simple organizational project. But during the process, I kept turning up these great little gems that had been buried in boxes for decades. That kept me digging for more. I started wondering “who the hell chose all the pictures we used back then? They missed all the good ones!” So I started going through everything I had piece by piece.
Then I figured if I was digging that far into the archival abyss, I’d better sucker some friends into helping me get through the piles and piles of film. Some of the stuff we turned up was really cool, and I thought before it was filed away and disappeared into the ether, I wanted to do something with it. Next thing I knew, I was making a book. Only I’m not a writer. Hell, I’m dyslexic. I thought it would be far more interesting to get in touch with the people in the images, the people who helped make things happen back in the day…get their stories, their memories. So I started putting out feelers, seeing if I could get enough people on board to move forward. The responses were overwhelmingly positive, and I realized pretty quickly that this was gonna happen.
Now that I had the images and the words in play, and more friends suckered in to helping me corral those who said they would write, I could move on to design. I already had the title I knew I wanted to use: “Cramp, Slash, & Burn: When Punk and Glam Were Twins”. Why that title? Because that’s how it looked through my lens. One day I was shooting a punk band, the next day it was glam rock. Sometimes I was even shooting bands whose members played for both sides. So the title was a natural fit from my perspective.
But back to the design, I knew I wanted to incorporate “80’s artifacts”…trinkets, memorabilia, ephemera that was authentic and meant something to the people whose images appeared on the pages. So I went back to my pool of writers and asked them to dig into their own archives for anything they’d be willing to mail in for me to photograph. And I got some great stuff. For example, if you look at the Fishbone spread, the rubber fish that I shot to go alongside the band image is actually IN the original image. The same for the plastic water gun opposite one of the L.A. Guns images. So this wasn’t just randomly placed “hey, this will look cool here” stuff…there’s rhyme and reason to the craziness. 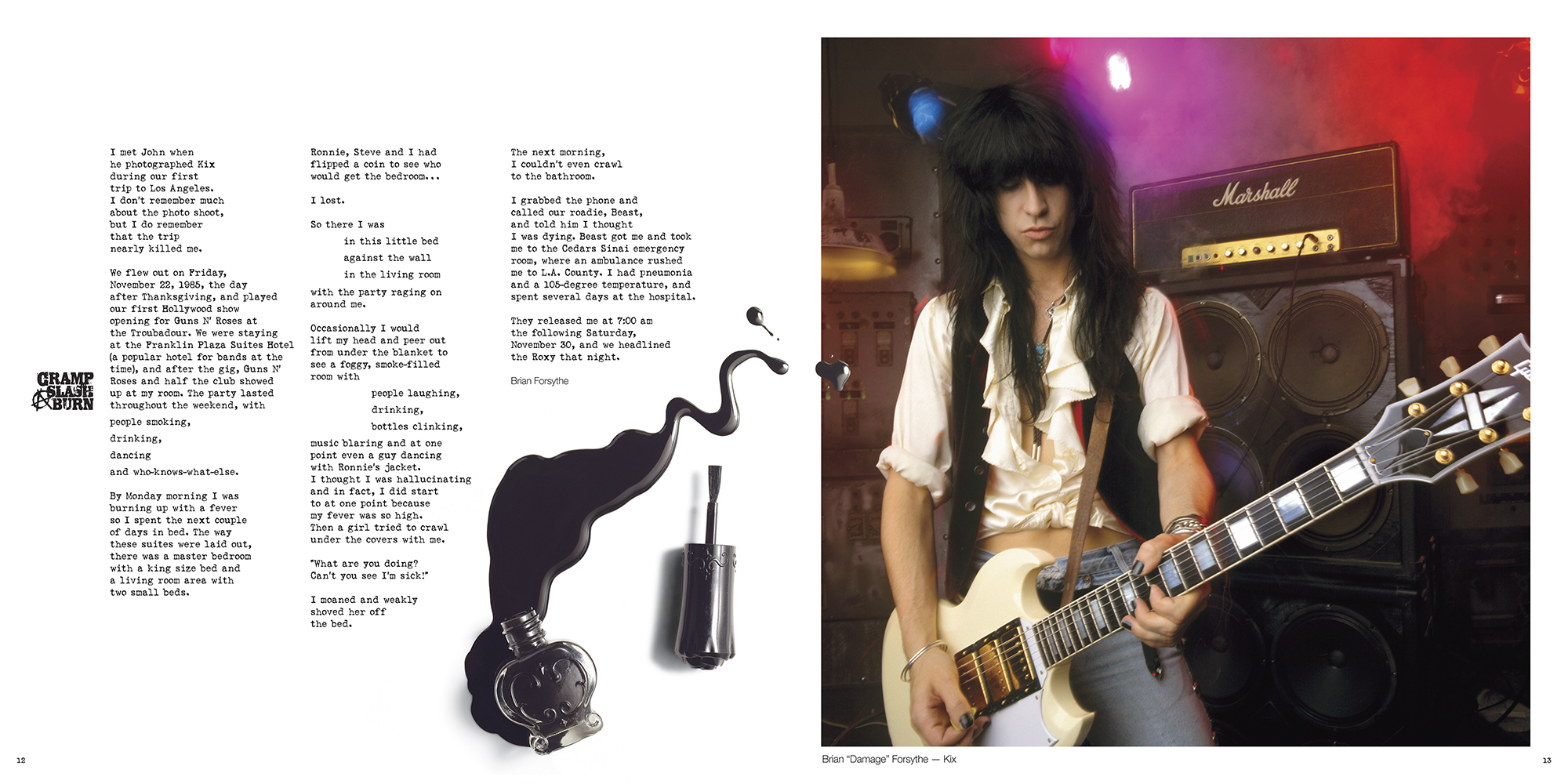 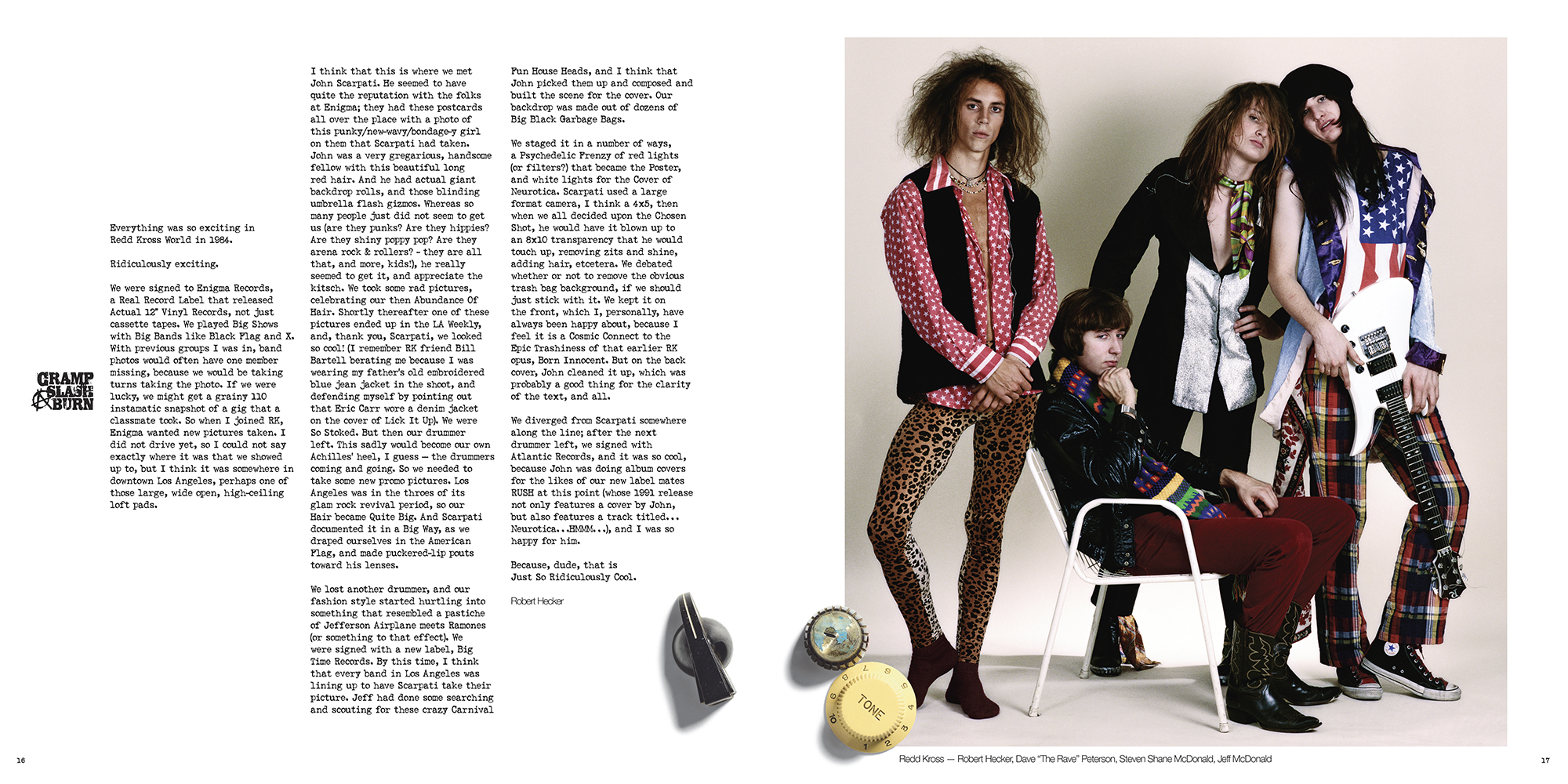 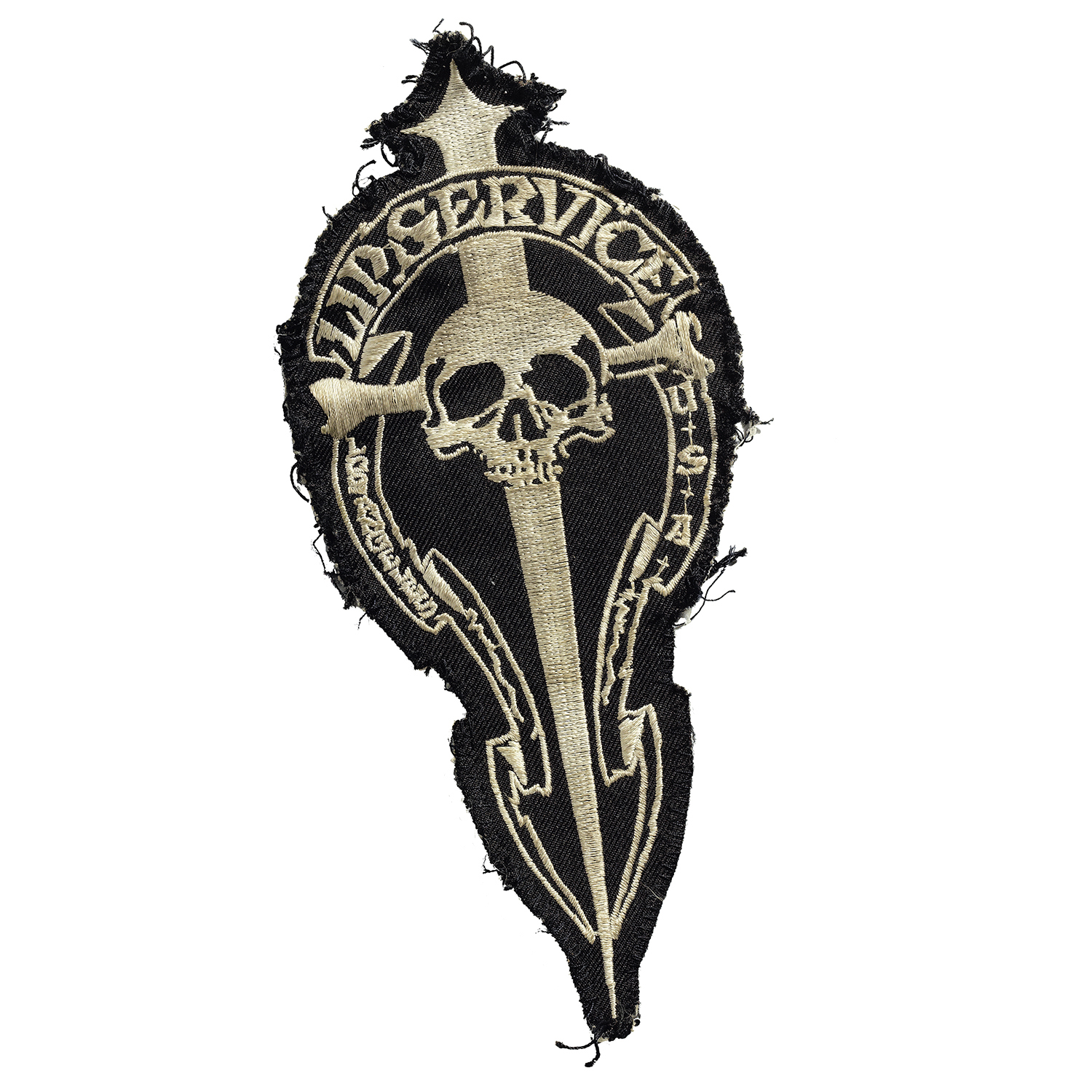 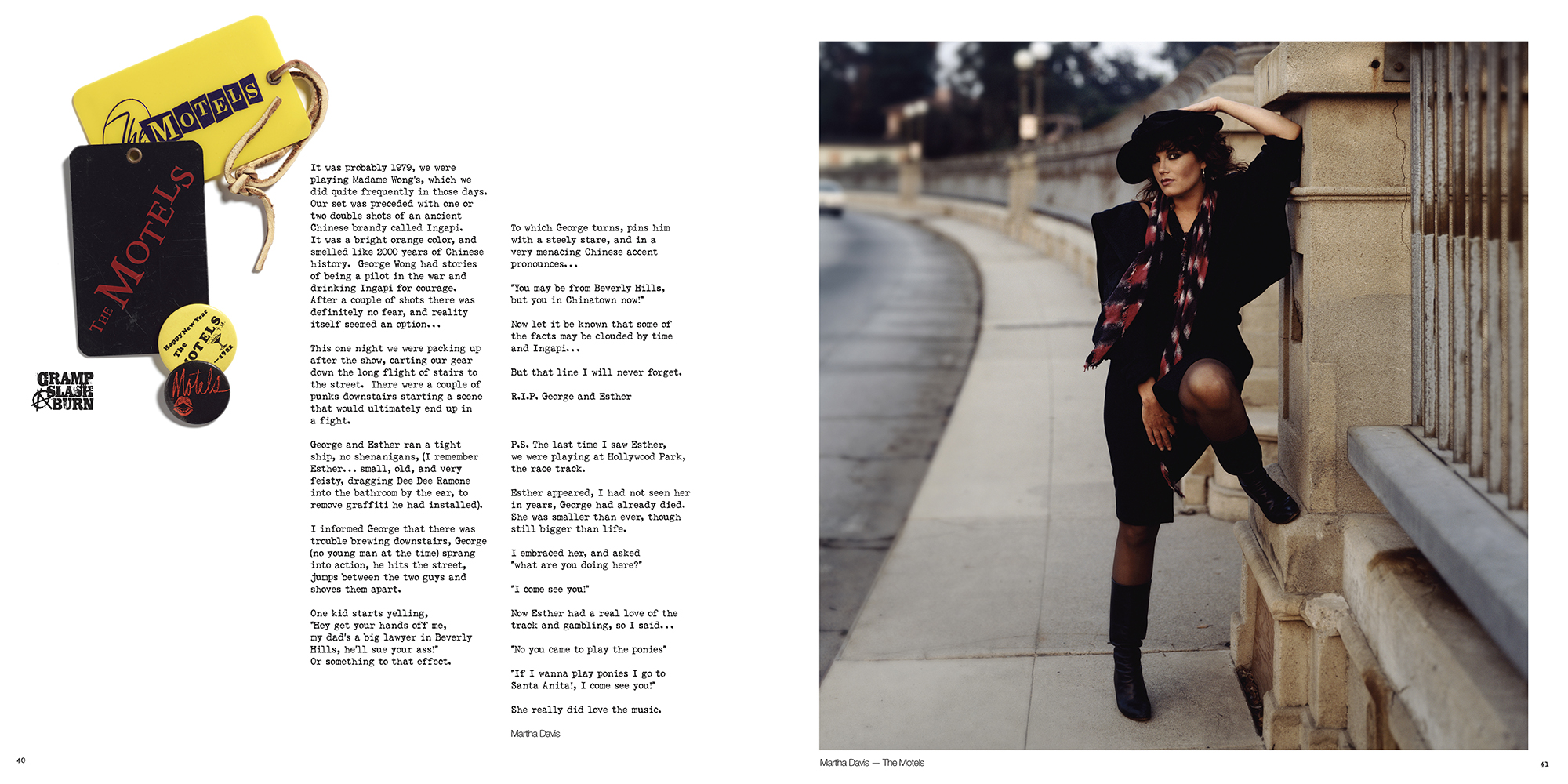 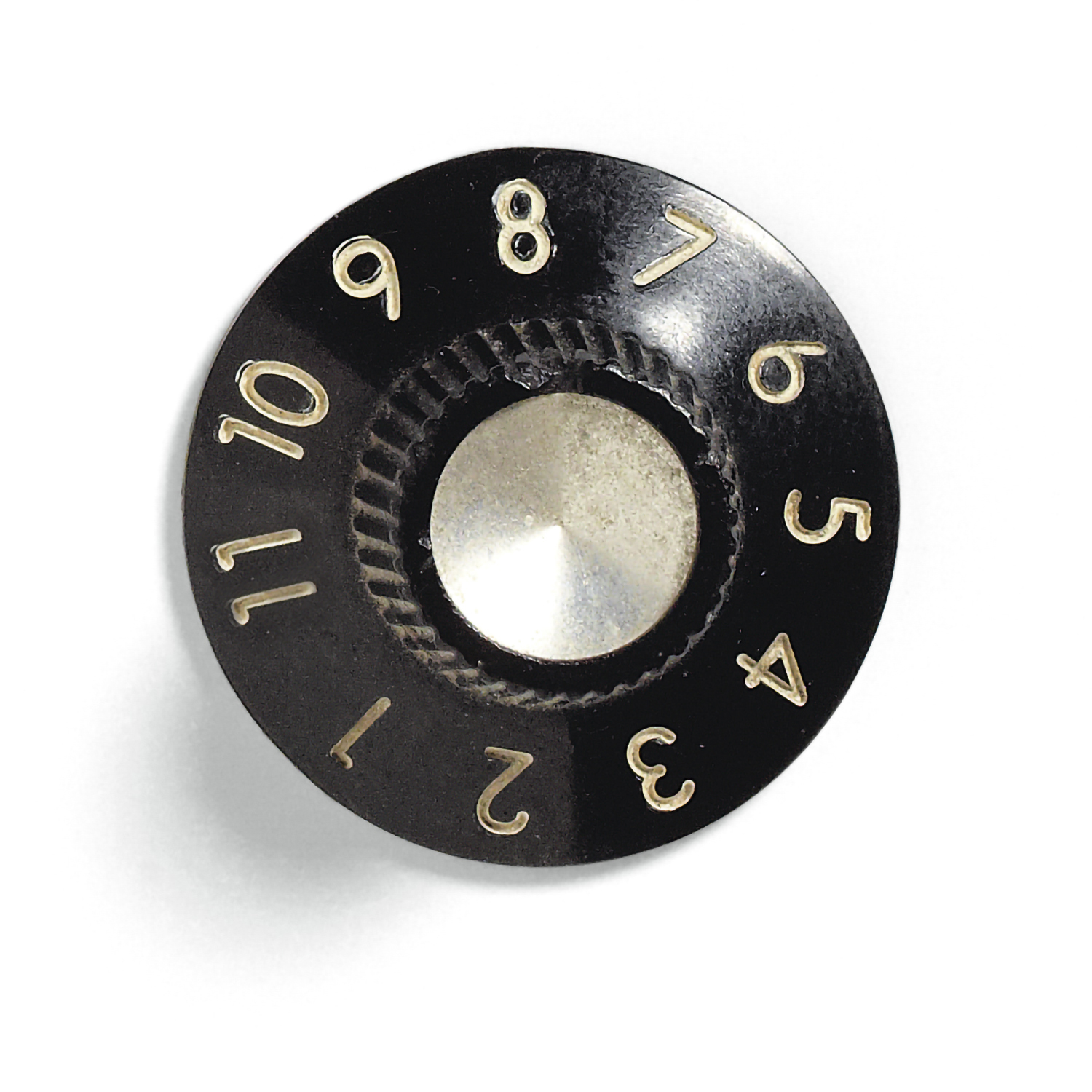 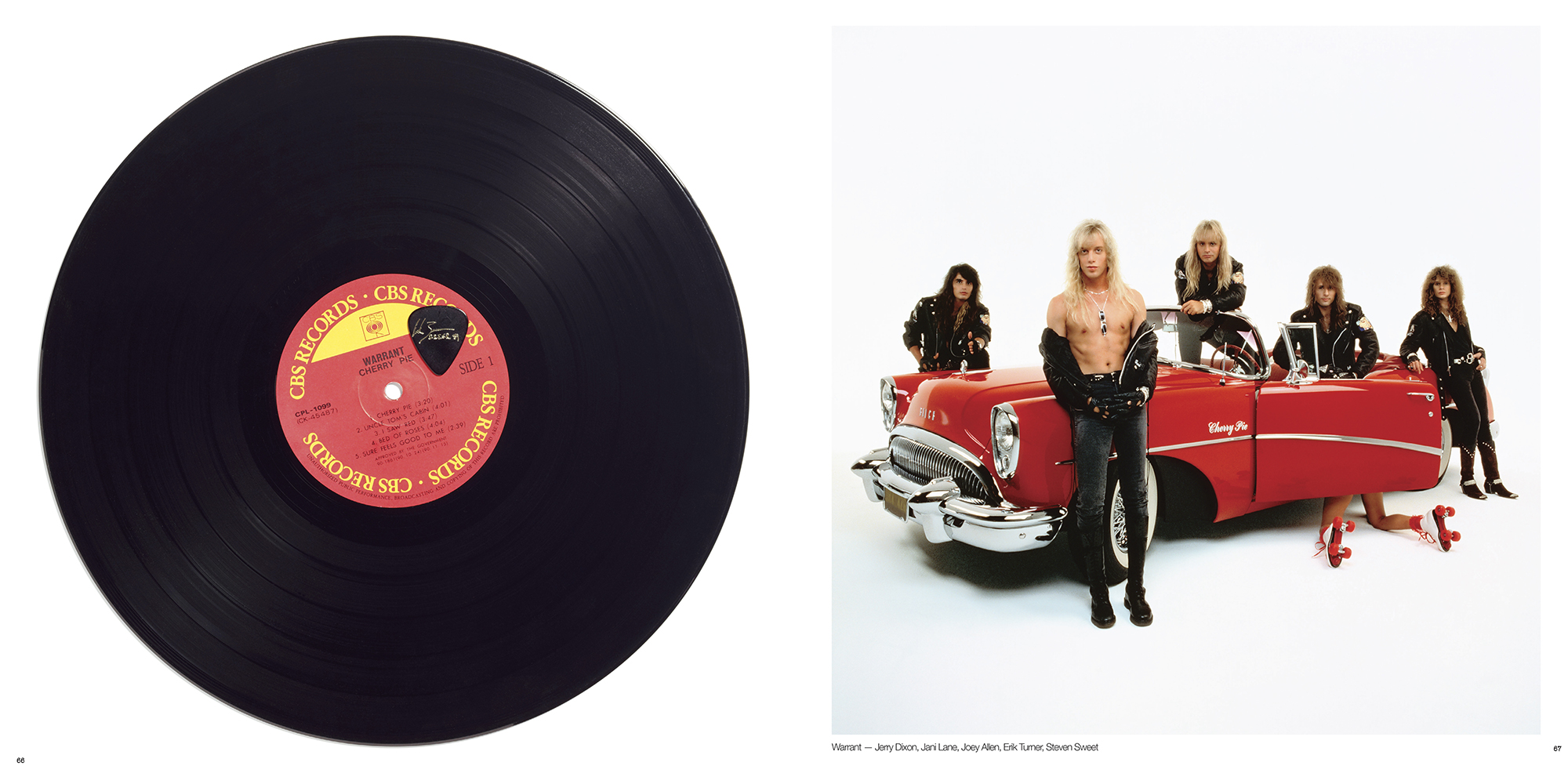 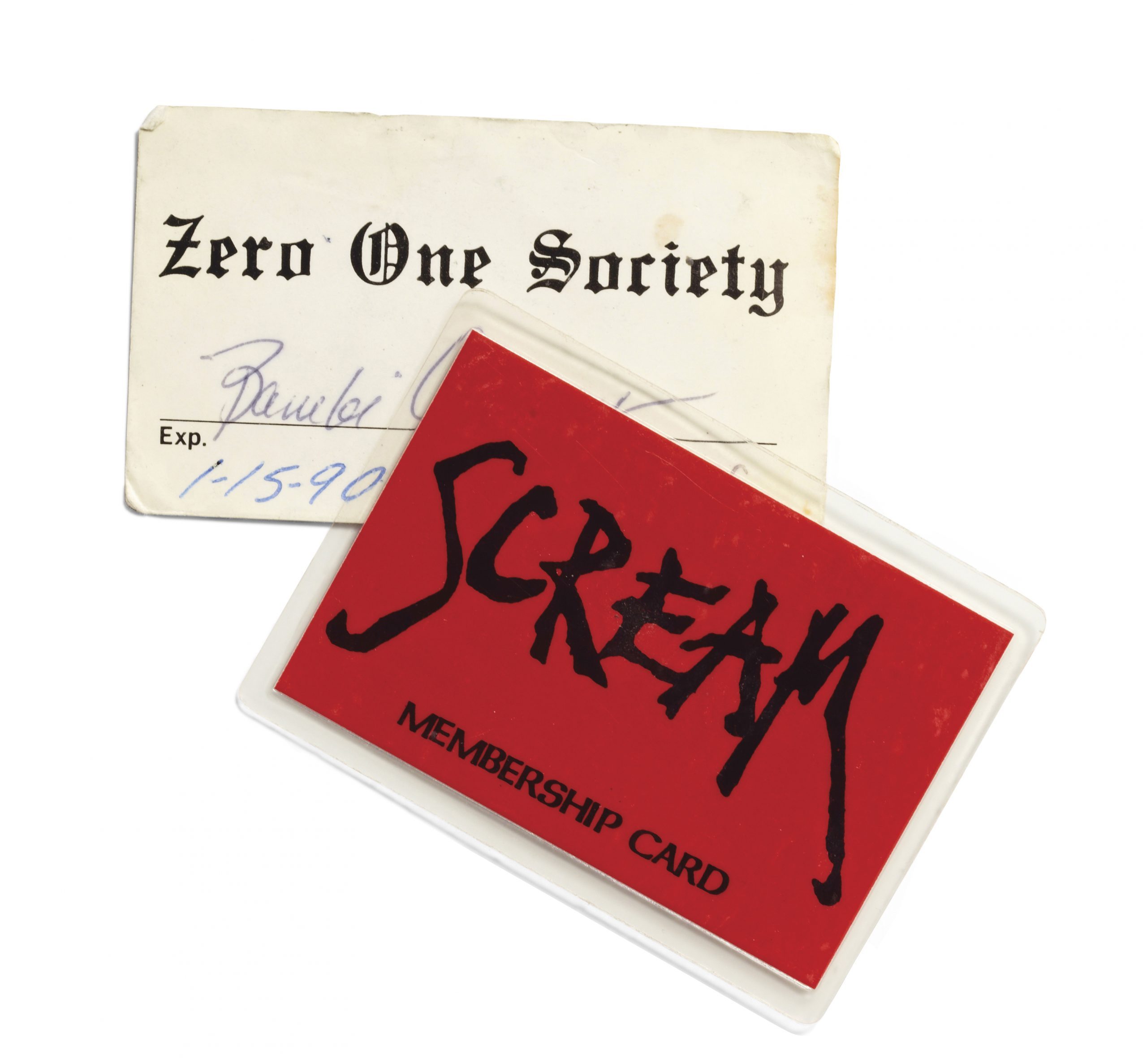 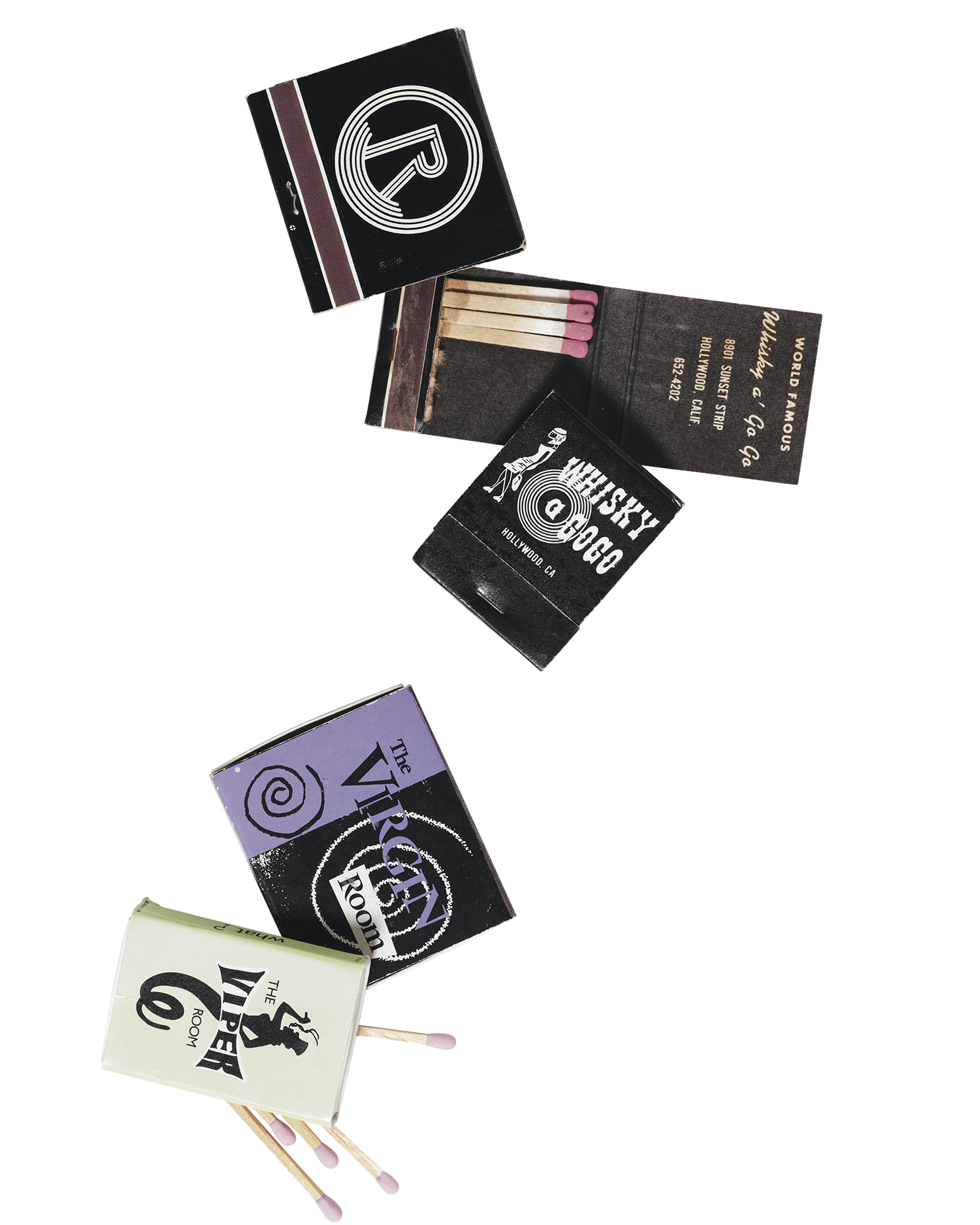 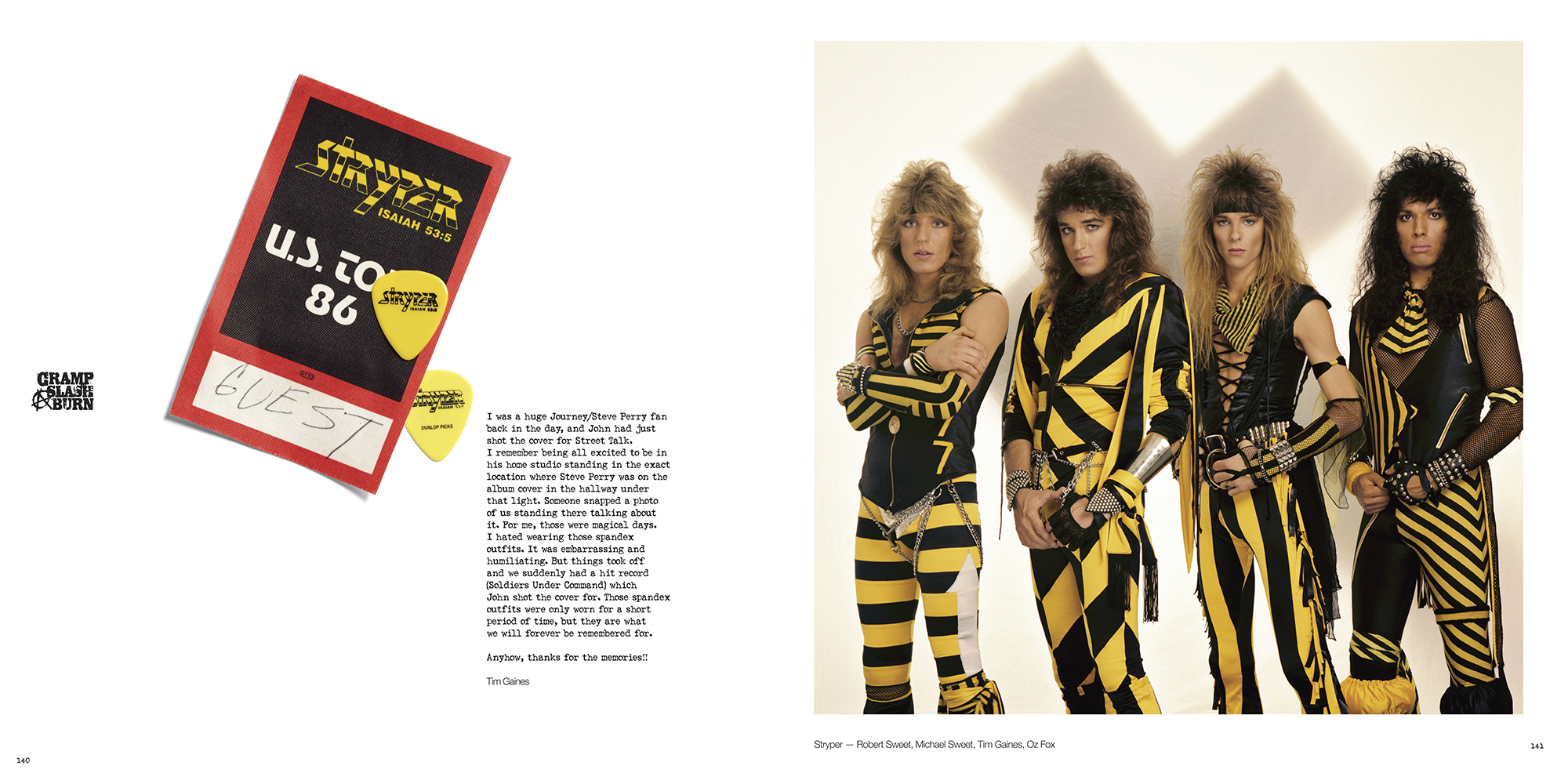 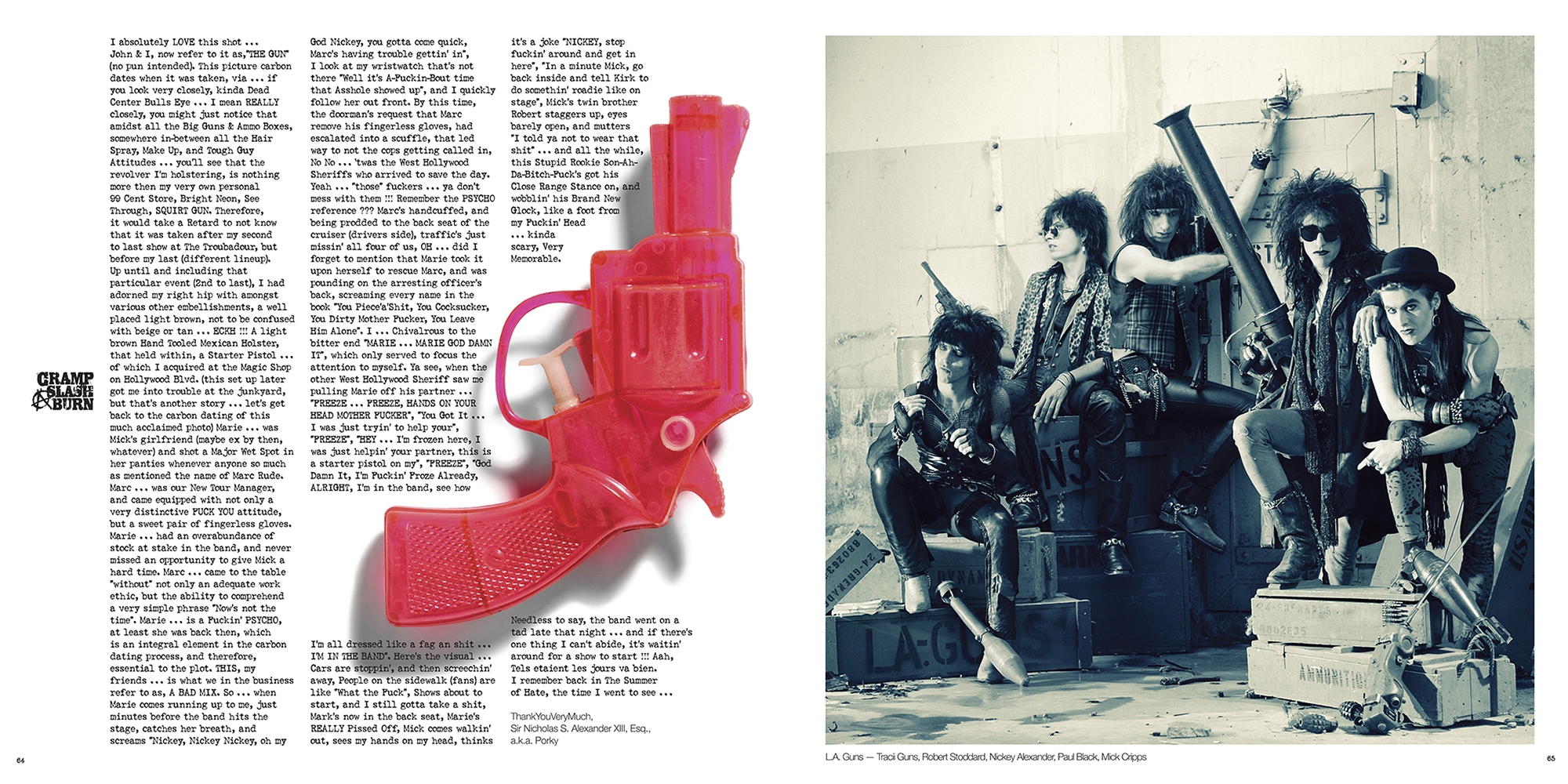 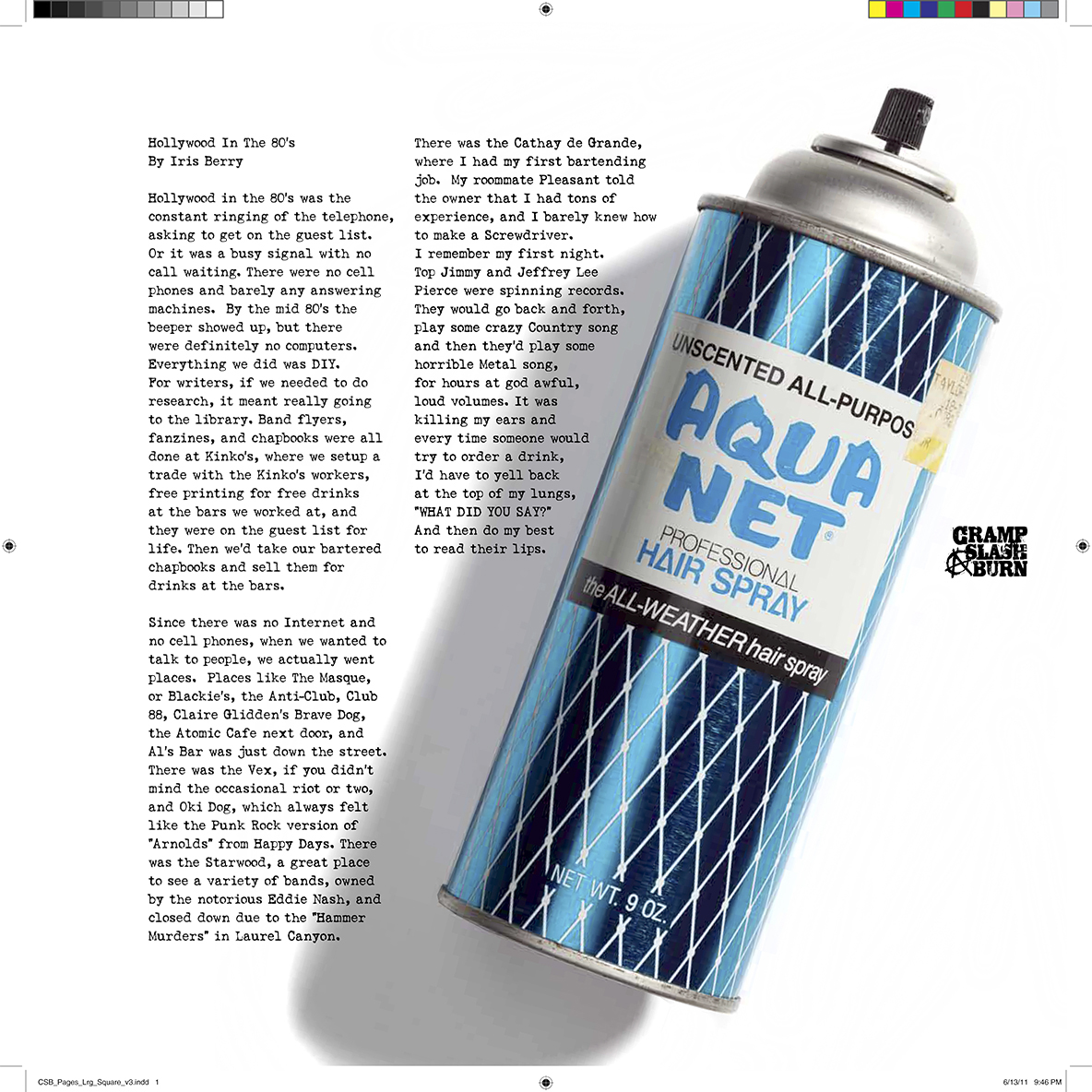 When it came to gathering design elements for Cramp, Slash, & Burn, there was one thing we knew was an absolute “must have”: a can of Aquanet. But it couldn’t be just ANY can of Aquanet. It needed to be the real deal…a vintage 80’s can.
We started the hunt with a simple post on Facebook asking folks if anyone knew the whereabouts of an aforementioned can. What was the number one response initially? “Yes!! I just saw one at Walmart/CVS/Target/Etc”. Did they miss the “vintage” part? Apparently they did. So while the suggestions for where I could go to just pick one up came pouring in, I found a picture online of what the old 80’s era cans looked liked in comparison with the newer version. I was thinking a little visual aid might help get the idea across. Not so much. More helpful suggestions…Walgreens,the Dollar Store. All I could do was shake my head.
In the meantime, a few friends who actually DID understand the difference were digging through their storage units and old boxes in their parent’s attics to see if just maybe…MAYBE they still had an old bottle of the stuff hanging around. No dice. We kept coming up empty handed.
At that point, the light bulb in my brain lit up. What would I do if I needed an obscure prop for a shoot with a client? I’d get on the horn with one of the big prop houses in Los Angeles or New York. So that’s what I did. And I found one! A place in L.A. had it and for $100, (yes, $100 bucks!) I could rent it! Paid overnight shipping and everything. Followed its cross-country progress through the marvel of internet technology and all but sat vigil by the front door waiting for its arrival. Finally, its hour arrived and I don’t know that I’d ever been more enthusiastic about greeting the UPS guy. As ridiculous as all this may sound, we were already over a month into the hunt and I really just wanted to wrap up the shot and move on to the next prop.
So the box arrives and I opened it up with the anticipation of a kid on Christmas morning. Packing slip out of the way, packing peanuts to the side…and staring back at me from the cardboard box was a $100 to rent, $50+ to ship overnight, brand new 2000’s version of an Aquanet can. The one I could have obtained by driving over to any of the previously mentioned sources and paying $3.49 for it. Immediate anticipation deflation.
I called the prop house, packed it up, shipped it back. They offered to send another can they had…this one they were certain was vintage and the kind I was looking for. I suggested a quick phone picture be taken so I could confirm it was indeed the right can before they went through with the packing and shipping. Good thing they agreed. The other can they had was vintage all right, but it looked like it may have been produced during the first year of Aquanet’s run. Too vintage. Like 1950’s vintage. So once again, I’m S.O.L.
By this time, I have friends of friends combing flea markets looking for the damn thing. Hell, my girlfriend is from New Jersey…which was quite possibly “Aquanet Central”…and even she can’t find one. She’d even contacted the parent company that manufactures Aquanet with no luck.
I went back to Facebook. Only now I offered a reward: $100 to the procurer of an authentic 80’s can! And I’d foot the bill for shipping. Only stipulation? That can is MINE after the shoot. Why? Because now it was personal damn it.
Then a buddy of mine from Louisville, KY calls. He knows a photographer in Louisville who’s an avid collector of all sorts of random craziness. And amongst that craziness is an old Aquanet can. Complete with price tag still intact. He sent a picture and I knew we’d found our CSB Holy Grail. I made good on the reward and he made good on allowing me to keep the can. Of course, the downside is that we had oddly started to enjoy the silliness of not being able to locate an old can of Aquanet…it had become our new favorite thing to complain about at the studio.
These days, the can is prominently displayed on a bookshelf in my living room. If I ever get around to it, someday it may even have a marble pedestal and a glass dome. 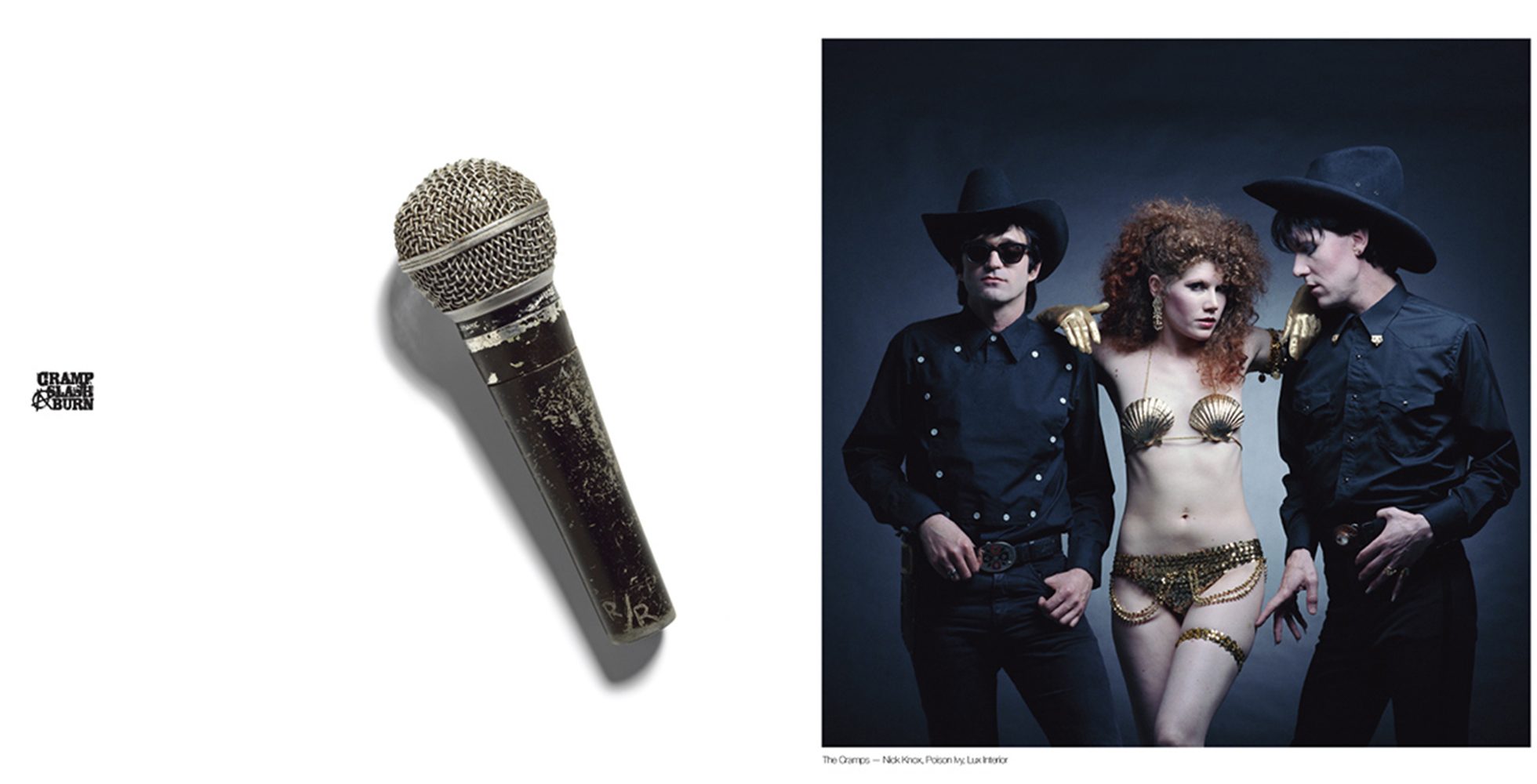 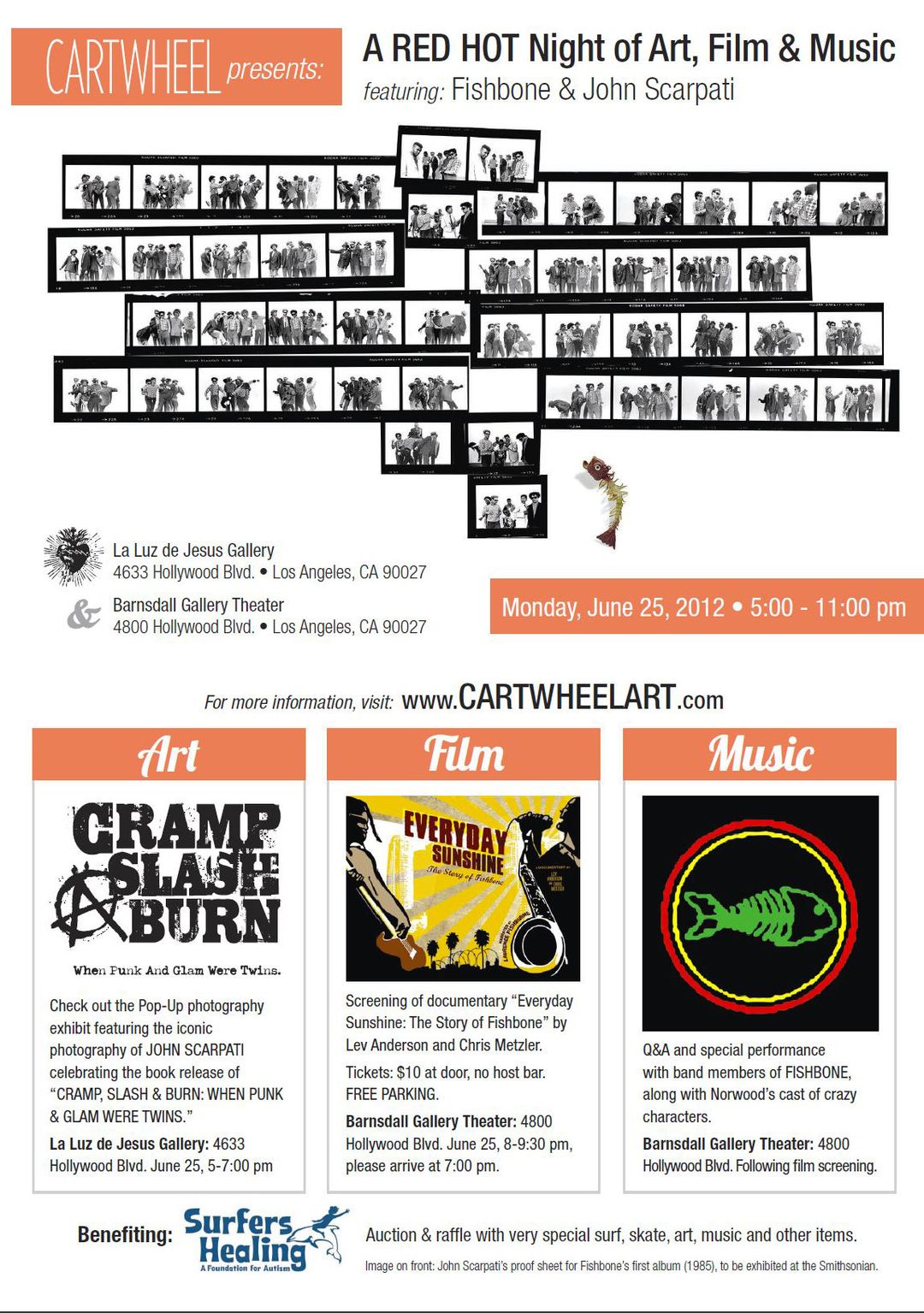